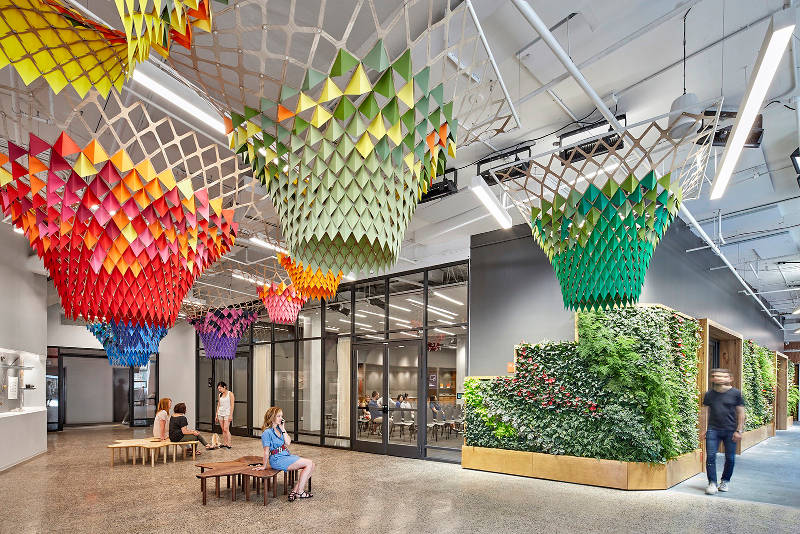 If you’re an entrepreneurial crafter, you probably owe Etsy a muffin basket. We thought Etsy’s offices would be one giant yarn-bomb experiment, but we’re impressed with their elegan, collab-friendly office spaces. Here’s more:

There are plenty of areas throughout Etsy’s office spaces to get your craft on. Image: Etsy

The Green Library may be he coolest hangout in the Etsy Corporate Headquarters, featuring a wall of plants and a hanging basket chair. Image: Etsy

Yes, there’s a big “swoosh” – it’s on the rooftop. But besides the signature swoosh, there are little nods to their sports origins, like the mosaic of Michael Jordan in their cafeteria (below).

A living wall of green plants is both stunning and helpful for interior air quality. Image: Gensler

Airbnb has revolutionized how we travel, and make it possible to stay somewhere other than a hotel – and their workspace reflects this. The meeting rooms look more like camping tents than office cubicles.

A contemplative space with a view in the new Apple Park headquarters. Image: Apple

The spherical building has been top secret for some time now. It’s finally complete — and the views and office design are breathtakingly minimalist. Rumor has it some employees are uncomfortable with the sparse and open office spaces. But the lack of visual clutter is probably incredible for unleashing your creative side, distraction-free.

The organic yet minimalist furniture was created by Naoto Fugasawa. Image: Apple

A giant wall mural of Los Angeles is the focal point of the main work space area. Image: Bestor Architecture

They may be owned by Apple, but they definitely don’t look like it. Gold stairwells and lacquer red meeting areas are just a few of the tricked out office design features in this cool office space. Two industrial buildings were renovated to create the space where audiophiles and hipsters come together.

Whiteboard walls allow creatives to scribble ideas on the wall on the fly. Image: Bestor Architecture

Google has offices around the world, and they’re all pretty creative. In fact, Google’s Zurich, Switzerland location took real ski gondolas and converted them into hanging cubicles. But the NYC location might feature the coolest office design, complete with hammocks for “hanging” out.

Tech companies are famous for their perks. This bright and sunny space with hammocks is a unique one. Image: Interior Architects

Designed to be part of the community, the Amazon offices in Seattle feature indoor and outdoor spaces. Image: NBBJ

A recent renovation updated Amazon’s Seattle offices to offer more work and lounge areas. An open floor plan optimizes flow and allows for workers to drift throughout the day while working.

Most of the office spaces in this article are off limits. But if you have at least 10,000 YouTube followers, you can access their workspace for your production needs. According to their website, “YouTube Space LA contains large production stages, green screens, cameras, lights, sound gear, electrical and grip equipment. We also offer post-production resources ranging from private editing suites to voice-over recording booths. It’s all available at no charge if your channel has at least 10,000 subscribers.”

Each booth lights up when occupied. Image: Studios Architecture

The Oakland headquarters feature a DJ booth and plenty of spaces to work, meet and hang out, like the “RADIO” themed booths above.

The San Francisco office designed by Interior Architects was such a hit that LinkedIn asked them to execute their NYC offices, too. Allegedly there’s a hidden speakeasy somewhere in the office spaces, but they’re not telling.

42 Gorgeous Desk Designs for any Office

5 Modern and Chic Ideas for Your Home Office

Scrub These Bad Bathroom Cleaning Habits Out of Your Life

Beat The Winter Blues With These 8 Winter Lighting Ideas For...

Your Ultimate Guide to the Do’s and Don’ts of a Kitchen...