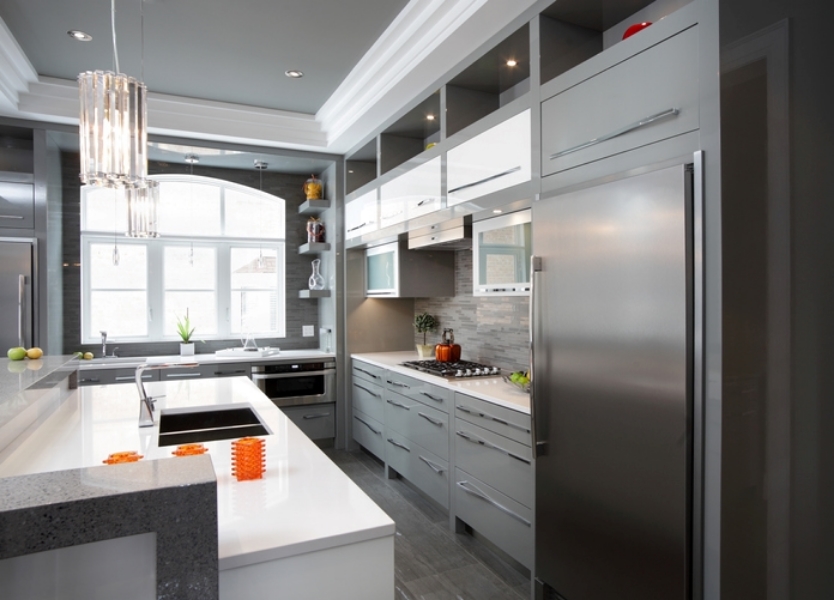 “Back in the 1940’s, kitchens tended to be small and appliances tended to be large,” explains Erin Davis, lead designer at Mosaik Design & Remodeling. “The concept evolved as a general guideline for creating a certain proximity and distance between the three main kitchen work sites: sink, refrigerator and range – and it is still relevant today.”

According to Davis, the work triangle theory was designed to produce comfort and efficiency. It’s all based on how easily you can move between these three main work areas.

“Within the basic ‘triangle’ structure – which can look very different in each individual space – there are a lot of design options that work well for overall kitchen appeal and practicality,” Davis says. “In fact, there’s no limit to the workable designs that keep the kitchen triangle intact while reflecting your own style and taste.”

Davis says it’s also important to consider the location of your workspaces, islands and other kitchen features. This helps to ensure good flow and functionality.

Are the kitchen features that Davis refers to actually crowding out the need for a kitchen triangle? According to Elle H-Millard at the NKBA, one of the emerging key design trends is open-concept kitchens in contemporary kitchen designs. These incorporate island prep stations with island bars and prep sinks. Galley kitchens are also making a comeback.

“The kitchen triangle layout has lost popularity over recent years because it doesn’t always work with every kitchen,” says Eric Gustafson, president of Pure Modern. “Many times, there isn’t enough space to set up a triangle kitchen – especially in a galley style kitchen.”

Gustafson says the triangle isn’t necessary in an open concept because kitchen zones are a better solution. “Although the kitchen triangle can still be relevant in some cases, many kitchen designs are moving away from that layout,” he says.

Not everyone agrees that the kitchen triangle is obsolete. Eric Sztanyo, a realtor at Keller Williams and founder of We Buy NKY Houses – a Cincinnati and Northern Kentucky cash home buyer, still sees their value.“As a rehabber who buys many older homes with older kitchens, I find the principles of the kitchen work triangle to still apply amazingly well today,” he says. “Yes, we may buy a house and do a complete demo of the kitchen, but more often than not, we end up putting the pieces back together in a way that still fits this time honored tradition.”

Sztanyo says the triangle design works well when incorporating stainless steel appliances and a subway tile backsplash. “It looks good. The lines are crisp. And maybe more importantly, it’s efficient in a way that will keep the next owner of the home happy for years to come,” he says.

The kitchen work triangle works for some, but not all cooks. Image: dit26978/Getty Images

Finding the right kitchen layout for you

Lauren Smyth, interior designer at Alturas Homes in Eagle, ID, agrees. “The kitchen working triangle will always be popular since it is a standard in the design industry and is set up this way to make meal prep and cooking easy,” she says. “There are other variances to this working triangle – for instance, in the situation of a linear kitchen layout where everything is on one wall.” In this situation, she says, a different configuration would work better.  “It would be ideal to have the sink in the center of the wall with some countertop space on either side and the stove and refrigerator on the ends of the ‘line’ so to speak.”

Ultimately, the kitchen triangle should be used as a guideline. That’s according to Susan Serra, certified kitchen designer at Susan Serra Associates. “Many designers now feel that the most important criteria for the kitchen design is the client’s lifestyle,” she explains. “The best scenario is when the designer points out both pros and cons of appliance locations, regardless of rules to meet the specific aesthetic and functional needs of the client.”

What are your thoughts on the kitchen work triangle? Is your kitchen set up in this way? Let us know in the comments.

Take a Look at the Latest Faucet Trends from Industry Leaders

Let These Modern Farmhouse Kitchen Ideas Inspire Your Next Remodel

4 Factors That Make All The Difference In Your Bathroom Remodel

Color Knockout: 20 Accent Chairs That Will Rock Your World

Scrub These Bad Bathroom Cleaning Habits Out of Your Life